On the Dawn of Our Nation's Birth

At the time we pulled together as a Nation, believing in United we stand. I don't feel real united at the moment. I feel our government is out of control. Congress--House and Senate are living high on the hog at our expense. We have no one truly worthy running for President. And Obama Care or as I call it Obama Doesn't Care has not helped anyone but those who were not working to begin with. We now have more people on welfare than we ever have.

Welfare is NOT a career choice, however our government is using it to control the people it governs. I'm not saying there are no people who need help. There are more than you know. We need to find our roots. Every family should have a garden for fresh vegetables not infected by Monsanto. We should share our bounty with family and friends. If everyone grew something different, we could trade off.

I'm all for planting my lawn with fruit, vegetables, and flowers. I'm also willing to share. I know there are people who need it. I'm one person, I could make a difference to someone. Just think if we all did this...we could change lives.

We need to give teachers the respect they deserve. They spent four years learning how to be the best they could be. They spend summers and evenings during the year taking classes to stay abreast of new things to teach your children. Think about it, if it weren't for teachers, there would be no doctors, lawyers, bankers, Wall Street brokers, Congress, Senate, President, Justices...no one would have a job. Teachers think out of the box. They spend hours trying to reach the unreachable child so he/she gets the education they need to be a productive adult. Test scores don't give you a full picture of any child. I know children who were awesome artists who did not do well on standardized tests. But the tests where one week out of their lives and they measured ability...NOT.

I have a friend on Facebook who is posting the number of deaths in Chicago this weekend. I have lost count, but the last post I read said two officers were injured when someone threw a firecracker at a patrol car. What have we come to? Instead of trying to improve things, we are killing each other and those who serve and protect us. Yes, I know there are bad police officers. They are thankfully in the minority. But, we have bad teachers, bad doctors, seriously bad politicians. When did we stop seeing each other as people with potential?

Deep pondering for someone who is not adulting today or tomorrow. It makes me wonder how we can change things? How can we become a "kinder, gentler nation." I spend Mondays from 9-1 reaching out to help those who want help. What about those who don't know how to ask for help? I work with a marvelous group of people with deep Christian roots, who believe no one gets ahead if you don't reach out. We have many success. We have those who give up on themselves or cannot overcome the obstacles in their lives.

We need to educate ourselves so we don't repeat the mistakes of the past. We need to demand our Congress and President uphold the Constitution our forefathers fought so bravely for. We need to start looking out for each other. We need to be vigilant--not vigilanties. Lawlessness is uncalled for. We need to support those who protect us, police, fire fighters, service personnel. We need to report suspicious activities. It's time to get involved. We can't sit back and do nothing.

Now, I think I've done enough pondering for one day. I'm going to turn in. Tomorrow I tackle some personal things I've been neglecting. I can return to adulting on Tuesday.

Friday Night in the Hood

For those who don't know, I was not told when I bought my house it was a  habitat house. I would not have purchased it if I had known. While they started this neighborhood in 1997, my house was not built until 2003. It's not a bad house if you like neighborhoods, I don't. So, tonight I see police lights flashing in my front yard. I decide to see what is going on. The following are the photos I took from the front porch. 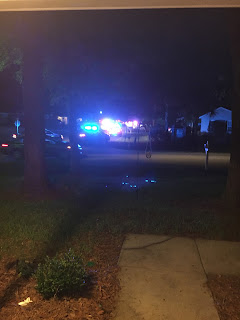 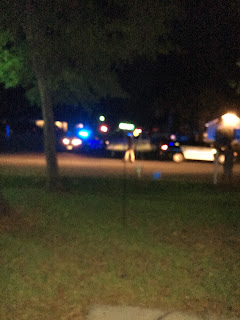 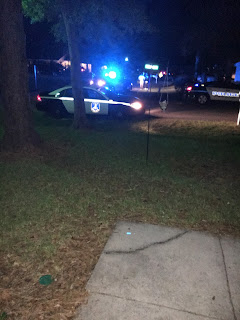 This is looking down Yost  Lane from my house. In the first photo there were at least twenty police cars and I watched the fire truck pull in. Then I grabbed my phone. The second one is across from my house and someone was trying to find out what was going on. One woman had parked her car across the road and walked to her house with her groceries as they were not letting people drive down the road. The third one is also in front of my house, by this time the ambulance and four police cars have made and exit. The fire truck was making its way toward leaving.

Someone on the street said they thought it was a hostage situation. It was not. We were the  Breaking News at 11pm. Three boys were walking down Yost Lane at about 9pm when a car slowed down and fired two shots before speeding away. One sixteen year old boy was taken to the hospital with a non-life threatening injury.  Yes, folks, he was shot.

A police car just drove through the neighborhood. I believe it is going to be a very long summer. 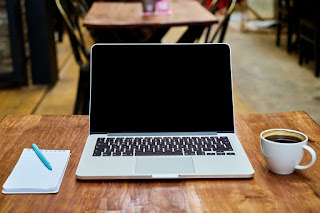